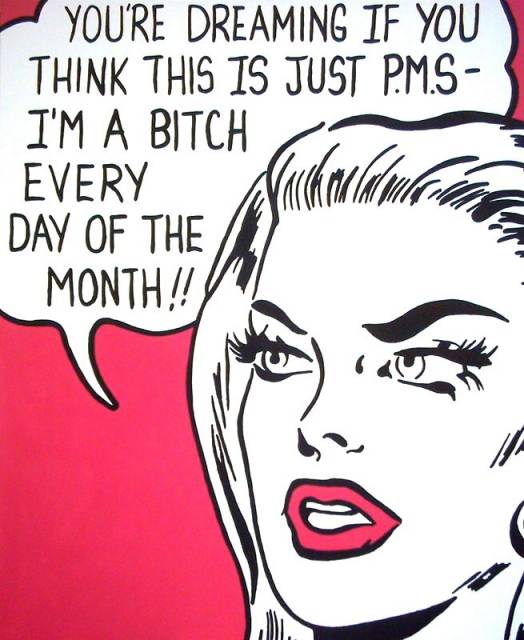 Heh. In recent past the tranquility of this here obscure sphere of the Inter-Webz has been disturbed by numerous imbroglios. Online differences of opinion, concomitant ruckus, faeces flinging monkey antics and the dissonant, emotio-menstrual outpourings of the shrill, shrewish shreek brigade. So. What is new you might ask? Nothing, really. The world is a lobotomized kindergarten of sorts and most of us are little more than crayon eating, barely conscious bipeds shuffling around arbitrarily. So in answer: all crazed on the western front, just as always.

But what I do find interesting is a discourse pattern that has become evermore obvious in recent months: *he* says something less than flattering yet explains the reasons for said calmly, logically, rationally.  *She* interprets *his* statement out of *her own* warped and biased perception, made all the worse due to her emotional reality. *She* gets upset. *Her* emotions take over. In response *she* warps the issues, reframes, goes personal, flings ad hominems, plays the victim. In consequence the original debate is derailed and the discourse degenerates into vicious name calling, freak outs, flaming, trolling and all the other good stuff. This is if it’s taking place on a male moderated blog.

What happens on a female blog is arguably a lot worse. You could call it vicious, authoritarian…even crypto-fascistic. The buildup is usually the same (as per this article’s prior paragraph). But once serious dissent is experienced, all too often female egos seem to shatter, the stress becomes too much for the “dearies” and in consequence they do what they always do when cornered: suppress the debate. How do they do this? Simples. By banning all dissenters, censoring / deleting all dissenting comments. Problem solved. And afterwards they can just carry on with their lovely, superficial flufftalk wuvving each other, cuddling and basking in the warm, comforting security and radiance of harmony. Never mind the futility of such “debates”. That’s an evil thought. Just something those bad, baaad penis wielders say. What are you, anyways, a woman hater?

Recent examples abound. One of the most prominent examples was the S*it Storm unleashed after Dalrock analyzed Susan Walsh’s misguided and polemic sentiment that “…frivolous divorces were overstated in the Manosphere echo chamber.” He went on to write an excellent followup of her hyperbolic and emotional response to his op. Witness also the massive, thermonuclear freakout of some rather hypocritical and shallow christian wiminz after their postings (on a public forum) were scrutinized in detail. The best example, imo, is what happened to Rollo Tomasi on HUS. He is well known for his excellent and calmly detached analyses of female nature and the dynamics of intersex relations. His writings even prompted the article in question (on HUS). Yet when he tried to rationally explain his position via comments he was soon suppressed by Susan Walsh who was foaming out of the mouth. His comments were censored and he evicted. He subsequently wrote an article about this episode on his own blog. Finally, just like Doug1 and Rmaxd, I myself have also been recently banned at HUS for disagreeing with the beloved leader Susan Walsh too markedly. Heh.

So what’s going on here? I’d say: an old, ooold truth. Women may be good at manipulation and pulling strings but they are – for the most part – rather bad at debate. This is partly because of biology (i.e. the female brain is more affected by emotions than the male brain and less able to separate emotional and rational discourse) but mostly because they are, quite literally, the weaker sex. They are only seldomly able to deal effectively with flak. As soon as things get less than pleasant (as they often do in a heated debate) and people (men) start to speak their minds in a blunt, unpolished, unperfumed fashion, women get upset. There is of course the rare exception. *Some* women *do* manage to keep calm and carry on. Just like *some* men behave just like your average woman (we call them ‘manginas’). But that is beside the point. Most women *don’t* manage. And when their emotions assume command you can rest assured that their irrational reaction will do the original discourse – whatever it was – griveous harm. They will try to derail and once they start playing the victim (as they always do) you can also be sure that some ‘White Knight’ / mangina will come rushing to their aid. This compulsion to rescue a “damsel in distress” might just be the worst instinct we men have at present.

1.) Know your foe. Education is your friend. Using logic and rational, argument-based appeals with women is pointless, counterproductive & doomed to failure. So don’t use logic. Logic is misogynist. Try to instill helpful emotions onto the woman. Know that women are like oversized emotional overhead projectors. Describing emotions leads the woman to *experience* these emotions (thank you Ross Jeffries). Use their emotional menstruation to your advantage rather than banging your head against the brick wall of their ‘blind spot’ blinders.

2.) Conserve your energy. Know which battles to fight, when to stand firm, when to evade, retreat and flee…to live another day, to fight another battle. We live in problematic times. I’ve christened this present era…the ‘Age of Rage’. I find this tag rather fitting. And things will just get worse from now on. Intersex alienation *will* get more severe. Count on it. So, imo, I would try to avoid discussions with women most of the time. Try to turn things around playfully, your sanity will thank you. Fight only in the rarest of circumstances and only when it is direly neccessary. When you fight apply overwhelming force to a clearly outlined area to maximize effect. Know that discussion, debate, arguments, logic…all of that…will be increasingly outlawed. These are male concepts. In our world male = bad. They will go, count on it. The plastic-fake, hypocritical, self-deluding “discourse” culture of Susan Walsh is the West’s zeitgeist. Her reality is the only reality that counts in our sick, demented societies.

3.) GYOW / try to create male only spheres. A no brainer. Obviously, men will remain men whatever comes. Discuss things with them. Broaden your horizon and learn from men. This is as it always has been and always will be. Men are the drivers of society, the creators of civilization, the builders of wealth, the protagonists of progress, the innovators of industry. As long as we as men can talk amongst ourselves in our own groups we will advance. We will learn new things. Ultimately, we will find a solution to this nightmarish cesspit the West has degenerated into. Remember, however, to keep women out. They have their own spheres, ever more of them. They cannot and will not comprehend the male experience. For obvious reasons (explained above) they will change the paradigms of our discourse as soon as they participate. As such they are a corrupting force.

Above all, remember that women are not men. Some men may eventually mature. Most women never will.